Forspoken Hands-On Preview (PS5) – Forspoken is the next big-budget game to be published by Square Enix, releasing on January 24 of next year to be exact.

Unsurprisingly then, it had the most dedicated space at the Square Enix booth at Tokyo Game Show 2022, with the demo stations seeing the longest wait times among SE’s featured titles.

After having been delayed twice now, we’ve seen plenty of demos and gameplay footage, but have yet been able to play the game or get a proper feel for it.

That’s now changed, as I had the opportunity to spend a little time playing Forspoken at TGS and walked away with various thoughts, concerns, and comments. 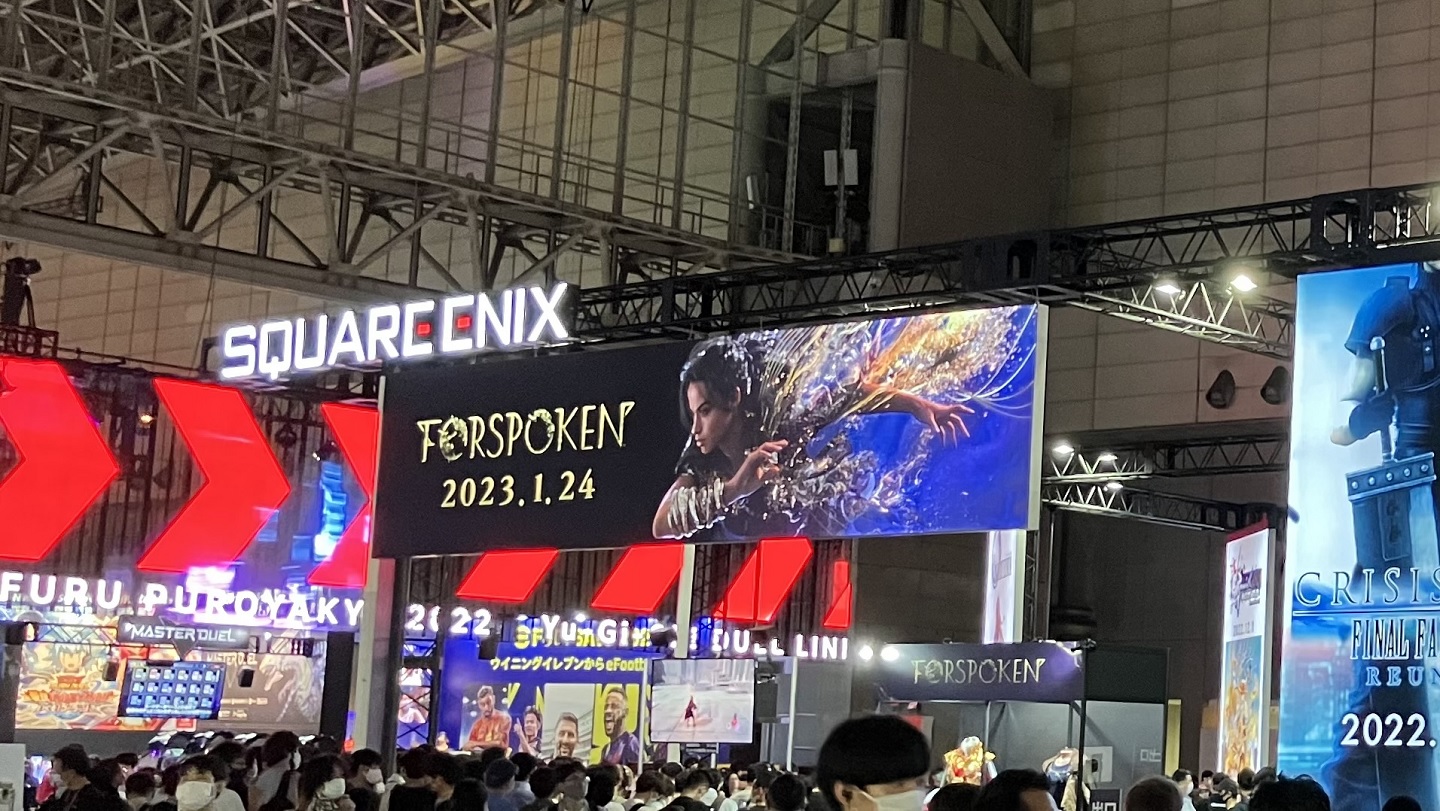 Before digging into the meat of my experience, here’s a quick rundown of Forspoken for those unfamiliar. Forspoken is an action role-playing game being made by Luminous Productions, which was formed from Business Division 2, the developers of Final Fantasy XV.

The story is of the isekai variety, as it sees the protagonist, 20-year-old New Yorker Frey Holland, transported to another world filled with monsters, magic, and all sorts of fantasy.

She gains supernatural powers after being equipped with a magical, talking bracelet named Cuff. Frey uses her newfound abilities them to fight the villains oppressing this other world’s common people, as she searches for a way back home.

Forspoken as a whole feels like it’s going for a more western flavor, likely to appeal to an international audience. The look and feel of the characters, settings, and other elements are very American or European-like.

Additionally, the writers and musical composers for the game are all western, mostly American.

My demo of Forspoken started somewhere after the very beginning of the story. Frey already had Cuff with her and some magical abilities and attacks at her disposal.

In the game, I found myself in a desert land reminiscent of southwestern US, where I lived as a kid. Waypoint markers on screen showed me points of interest, so it was time to get moving. 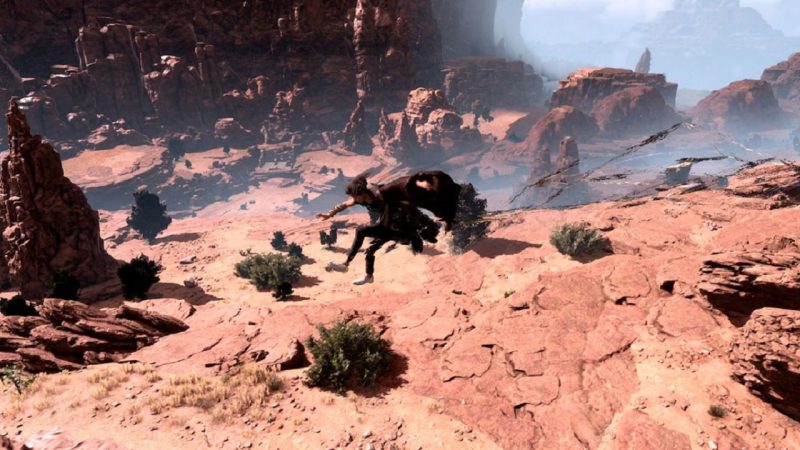 I was able to sprint wicked fast and do Magic Parkour over obstacles by holding the circle button while running. While it certainly looked flashy thanks to dazzling particle effects and animations, this form of traversal had some shortcomings. One was losing the ability to move the camera.

That’s because of the circle button needing to be held, so your right thumb can’t be on the right analog stick to move the camera (I suppose the upcoming DualSense Edge controller’s back buttons will solve this).

As a player, I felt a little loss of control while doing Magic Parkour. Everything while using it is automatic. Sure the animations look cool, but I have no input on those – I’m not hitting a button to do that flip or tumble.

With no way to mix up the parkour myself with tricks and the lack of camera control, Magic Parkour quickly lost, well, its magic. Fortunately, based on past trailers, there will be other forms of traversal. Hopefully, those will be better and more fun to use, especially since this is an open-world game.

Speaking of the open-world, the desert area available to me to explore was pretty lifeless and not filled with too much to do, or even see.

I’ll give it the benefit of the doubt and chalk it up to the place being a desert and this being a demo. But I sure hope the other lands have more to interact with than what I had here. 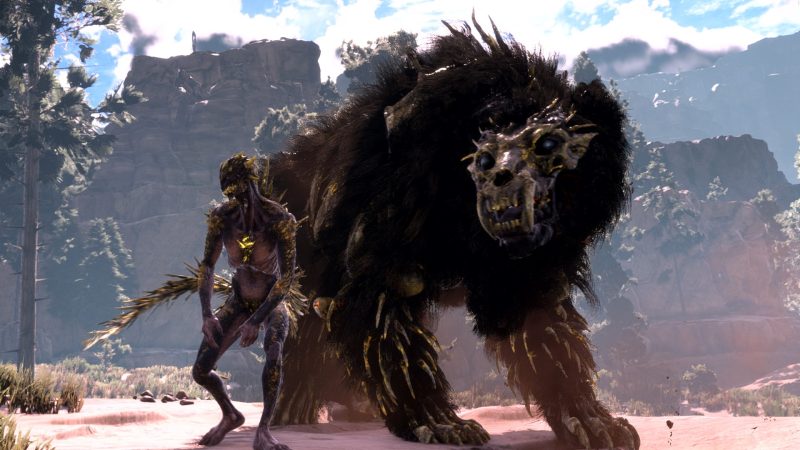 Soon enough, I encountered some enemies to fight. The common, low-level enemies were corrupted humans or humanoids that were basically generic zombies in both how they move and look.

They were boringly easy to make piecework out of thanks to Frey’s quick movement and offensive powers. More visibly interesting and challenging to fight are the larger monsters in the world.

Fighting these enemies required more careful consideration with how you move and attack. And that’s where I began to recognize the idiosyncrasies of its combat.

Forspoken’s combat is third-person action and even shooting at times. Attacks are mapped to the R2 right trigger while Support Magic is used via the L2 left trigger.

One type of fire-themed attack I used rapidly blasted away at enemies in such a way a submachine gun would. An earth-themed attack conjured up a large and long flexible tree vine that I swung around to hit away at my adversaries.

Support Magic offered ways to give you some advantage in combat. For example, one earth-themed Support Magic summoned roots out of the ground to wrap around an enemy so it was unable to move or attack me. 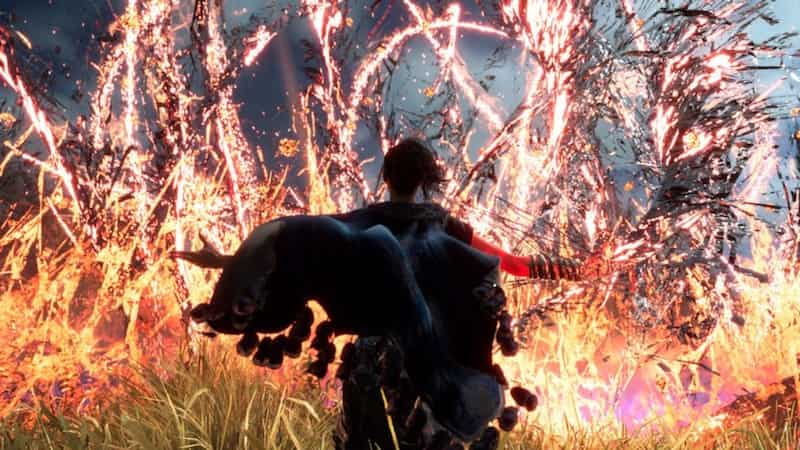 That sounds all good and fine, but how everything handled in actual combat is where I had issues. Attacks and magic look very good with all the visual flair of modern effects and acrobatic animation.

However, it’s those very combat animations that actually gives way to combat that doesn’t control as tight and responsive as I’d like. A number of the attack animations can take a little more time than would be desirable.

I also wasn’t able to cancel out of these long animations.

Furthermore, when switching your attacks or support magic by holding the respective shoulder buttons (L1 / R1), the game crawls to a freeze as it brings up a circle menu for you to then select using the analog stick.

It’s the kind of pump on the brakes that ruins the rhythm of the fast-action combat the team is going for.

So what I felt left with was combat that did not feel smooth or fully responsive – like there was always just enough friction to disrupt any strong sense of fluidity.

Having framerate drops didn’t help either. The camera wasn’t always my friend, as it wouldn’t be in quite the right spot or follow the action in a way to make things visually easy to track.

For those who have played Final Fantasy XV, some of these matters I’m sure sound familiar. The bottom line: combat looks smooth but doesn’t feel that way for the player. 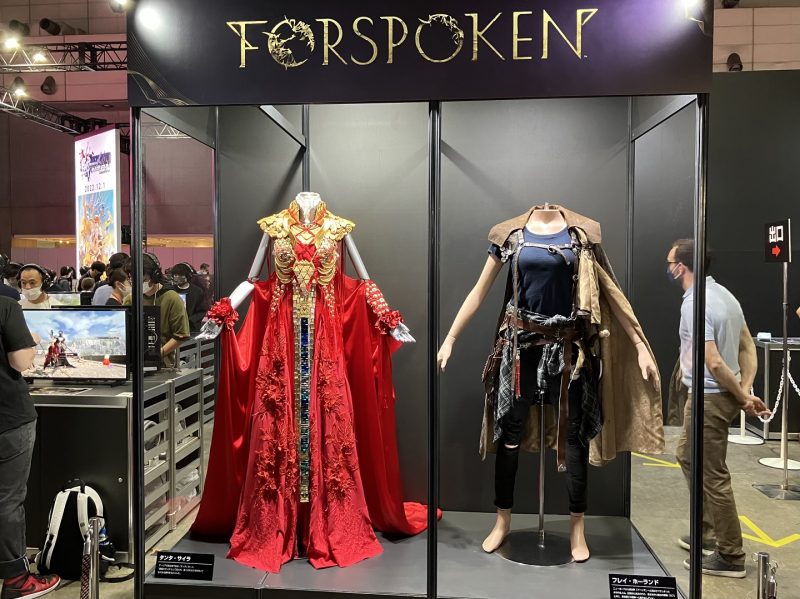 Lastly, I have to address the most recent thing Forspoken became famous for on the internet. About a month ago, an official video ad went out on the Forspoken Twitter that people hated due to its dialogue.

It could be that some of you were thinking, “Oh, maybe Faye is speaking that way only for the trailer.”

Well, folks, I’m here to say that, at least based on my demo time, it is not. I heard some lines delivered on the level of cringe that was in that ad.

There was dialogue that seemed to be what I imagine an older person’s idea of what teenagers talk like. It’s not good. I did not like it. And at this point in development, perhaps it’s too late for them to change all that.

This is just how Forspoken is, and we will have to hope the story and other aspects are good enough to make up for it.